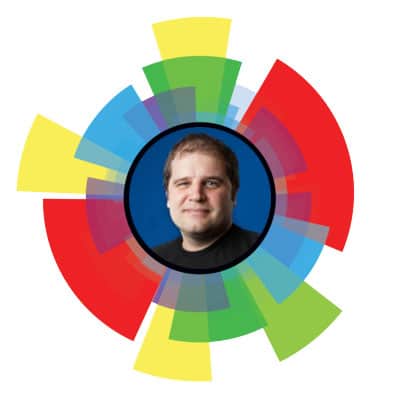 Pete Warden is a leading thinker, innovator and entrepreneur in visual AI, software and big data.

In 2003, Pete created a set of 45 image processing filters that were able to detect features in video content at 30 fps on 2003-era laptops. Apple bought his technology and hired him to work on integrating it into Apple’s imaging-related products.

In 2011, Pete co-founded Jetpac, serving as CTO and building the company’s technical team. This venture capital-backed startup created a unique product that analyzed the pixel data of over 140 million photos from Instagram and turned them into in-depth guides for more than 5,000 cities around the world. Pete joined Google in 2014 when Google acquired Jetpac.

Pete is currently a Staff Research Engineer at Google, focused on enabling the deployment of machine learning in cost- and power-constrained systems. At Google, Pete leads the development of the TensorFlow Lite machine learning framework for mobile and embedded applications, including a recently released experimental version of TensorFlow Lite for microcontrollers, which can be used on low-cost chips with less than 100 Kbytes of memory.

Pete is a sought-after speaker and writes a popular blog at www.petewarden.com. He is the author of two O’Reilly books, “Public Data Sources” and the “Big Data Glossary”. He earned his B.S. in computer science from the University of Manchester.

All Sessions by Pete Warden